Put Me In Your Suitcase: New York 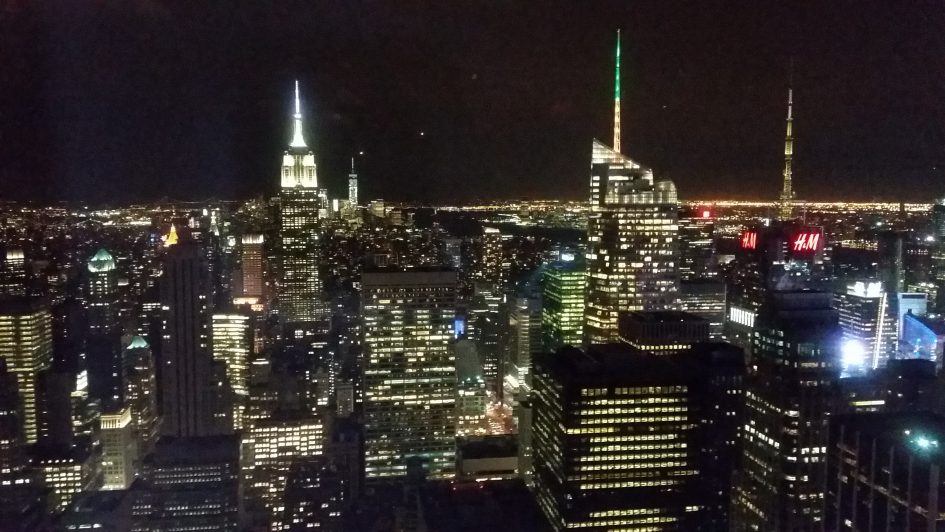 This is going to be the first of my new travel blog series. I call it, “Put Me In Your Suitcase” as come on, we’ve all said that once or twice before!

Since I started blogging last Summer, I’ve told you about my trips to London and my weekend away in Wales back in March. It’s nice to read about other people’s experiences in the place where you want to visit. If you’re a helpful kind of person like me, you probably enjoy telling folk about where to go, what to see, the hotel to steer clear of, the restaurant to eat more than once in etc etc. Sharing is caring after all!

I’ve been to America many times as a young girl. To date, I’ve visited The Big Apple a.k.a New York twice. The first time when I was 19 and then again when I turned 30. Now, I know I love London, lots, but when it comes to New York….well. It’s just magical. The fact that I bloody love Americans too probably goes in its favour.

For anyone travelling to New York for the first time, I imagine it can be quite daunting. It’s a big old city and there’s so much to see. Usually, for us Brits, we tend to go for 4-5 days and so you want to see as much as you can when you’re there.

First things first. I’d like to share with you what I think is quite an unknown source (amongst people I know it seems anyway) for booking hotels, trips, holidays, hotels only, flights only…you get the picture.

Their prices never cease to amaze me when I’m comparing prices for wherever I go. FYI- I’m not being paid to tell you about them (I wish!). I just want to share this tip with you because honestly, the site is fab.

Back when I was 19, my Mum and Dad spoilt both me and my Sister with a trip to New York and we stayed in the fabulous Waldorf Astoria. You’ll recognise it from so many films. It’s just beautiful inside. So much grandeur. Old school, but amazing. The service is fantastic, just what you would expect from a 5 star hotel. As you come in off the street, the decadent staircase leads you up into the lobby and into the wooden panelled front desk area. Something about the place just makes you feel special. There was some sort of event on in the lobby when we arrived.

(I care more about picture quality these days, apologies I didn’t back then!) 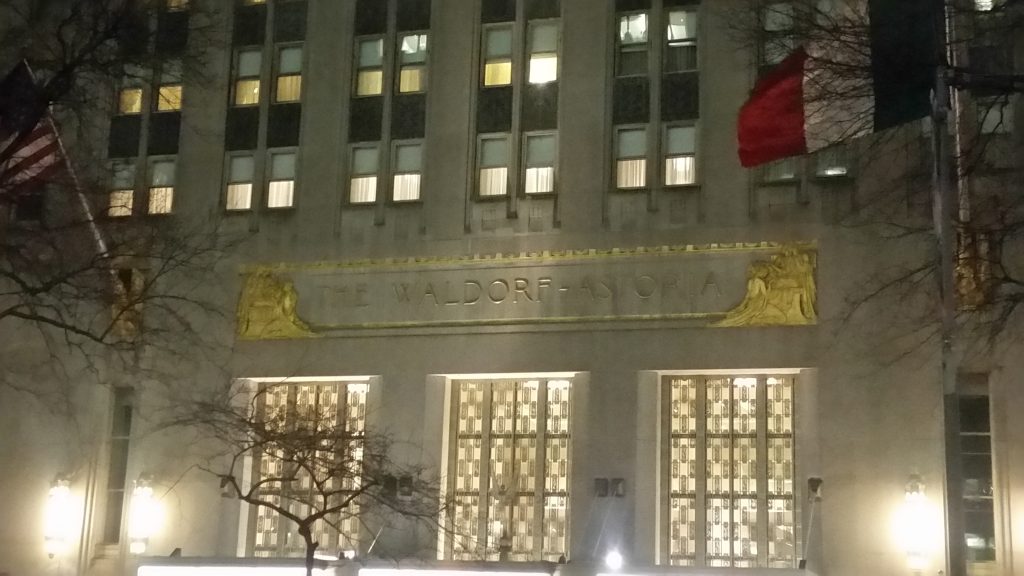 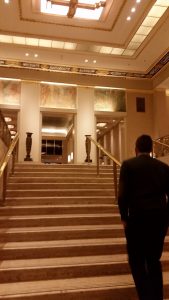 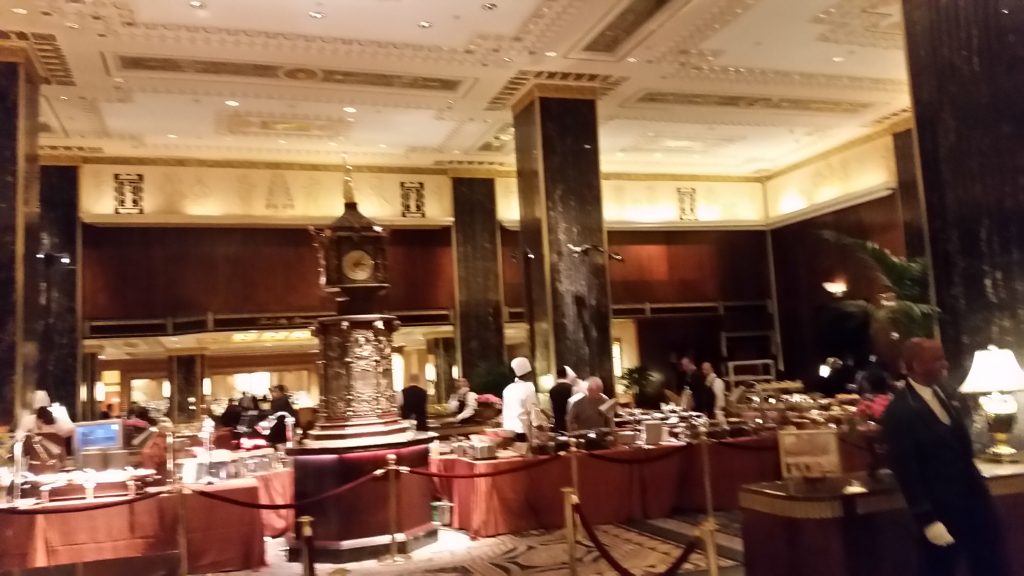 I knew I wanted to come back here when I returned for my 30th birthday celebrations, even though there were so many modern hotels on offer, the memories drew me back. There was no other option for me personally, it had to be The Waldorf.

I wanted to fill my second visit with sight seeing, taking in the New York lifestyle. I knew my boyfriend would prefer that too (he hates shopping!).

If you want to cram in the sights too, my advice is to buy a pass before you go via somewhere like viator.com

You can buy it for as many locations as you have on your list and they’re great value for the major attractions.

We saw them all and much more!

Places I wanted to eat at:

As soon as we checked in and dropped the bags off, we had a city to explore! It was dark by this point so we walked from Park Avenue to Times Square to get involved in the hustle and bustle. I was just so excited to be there! 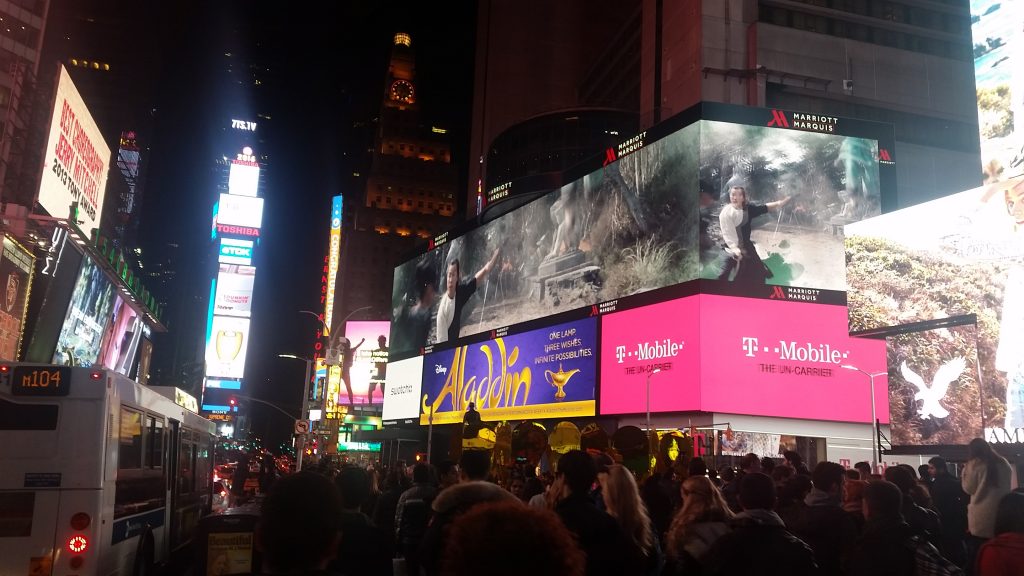 Mum had bought us tickets to watch Aladdin (my 2nd fave Disney film after Beauty and the Beast) on Broadway towards the end of our stay and if theatre is your vibe, this production blew all other shows I’d seen in London out of the water! The colours in Times Square are electric.

Before we headed back to the room, we went for a walk around Grand Central Station too. It’s more than just a train station. The architecture is incredible and buskers fill the corridors with jazz and song. 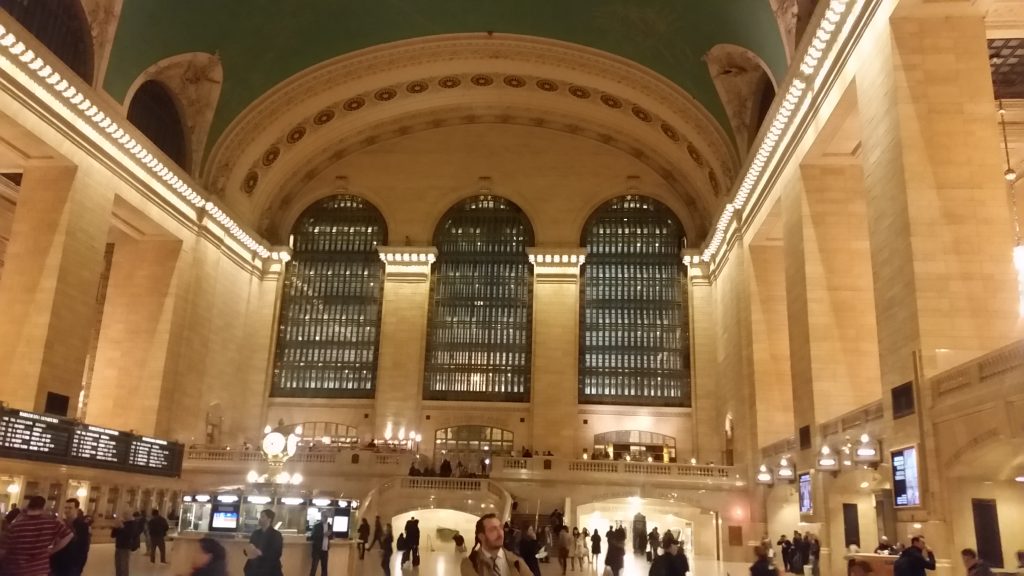 Two popular attractions are the top of the Empire State Building and The Rockefeller Centre.

Tips: go really early (we were there before 9am) to see the views from the top of the Empire State; it’ll be less busy and you want to see the fantastic views in the day light. You can get a 360 view of the entire city. It’s spectacular!

Try the Rockefeller Centre when it’s dark. The city looks beautiful when it’s lit up and all sparkly. We went around 9.30pm and there wasn’t a queue. It’s open until 11pm most nights I believe. 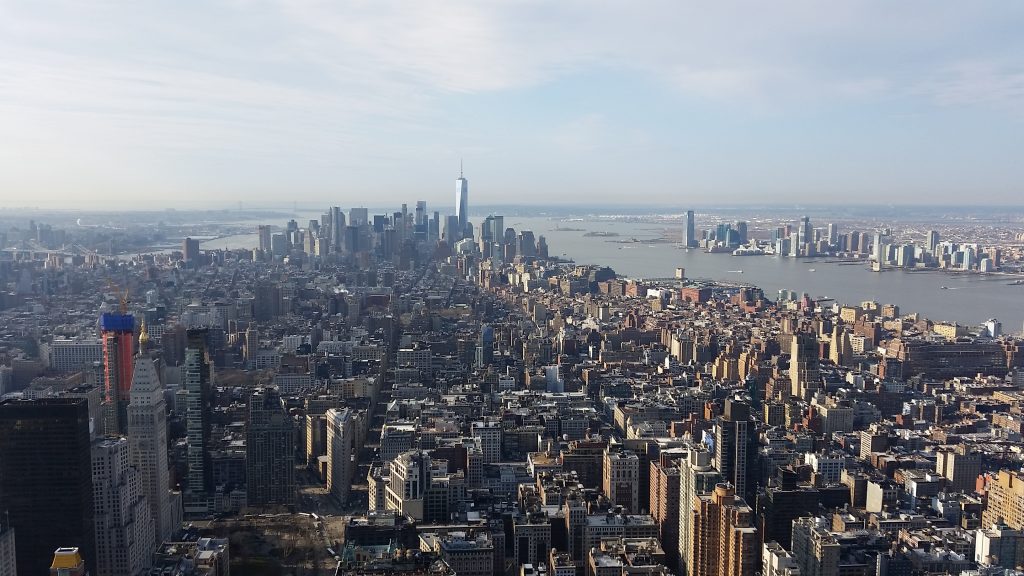 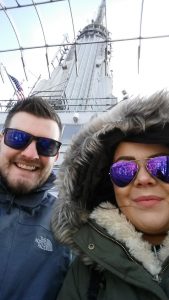 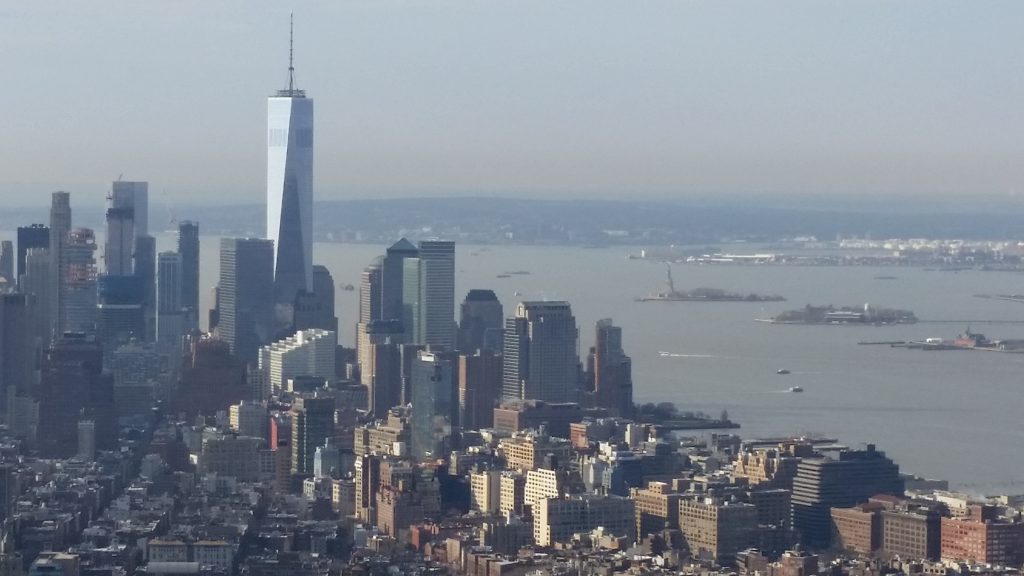 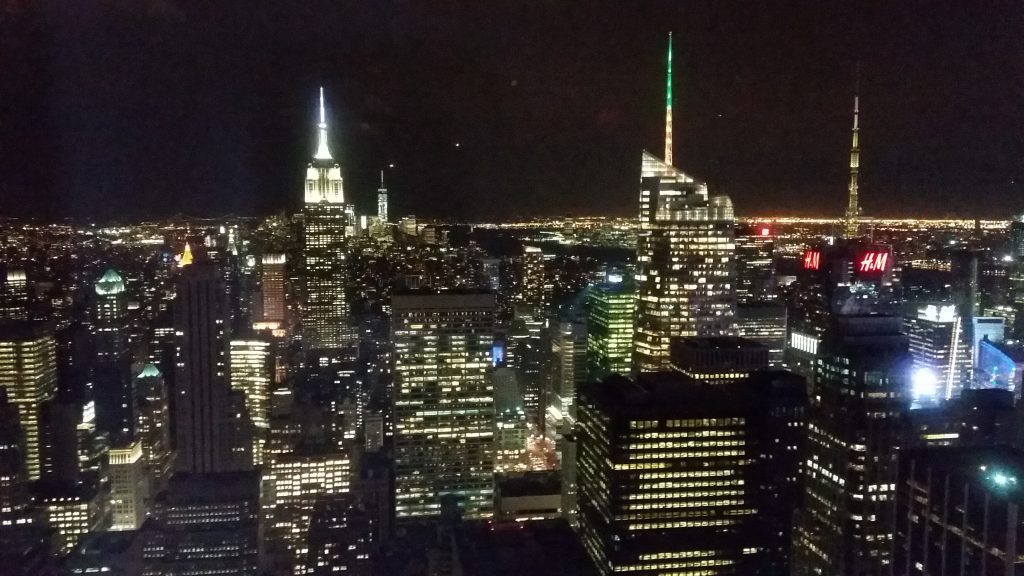 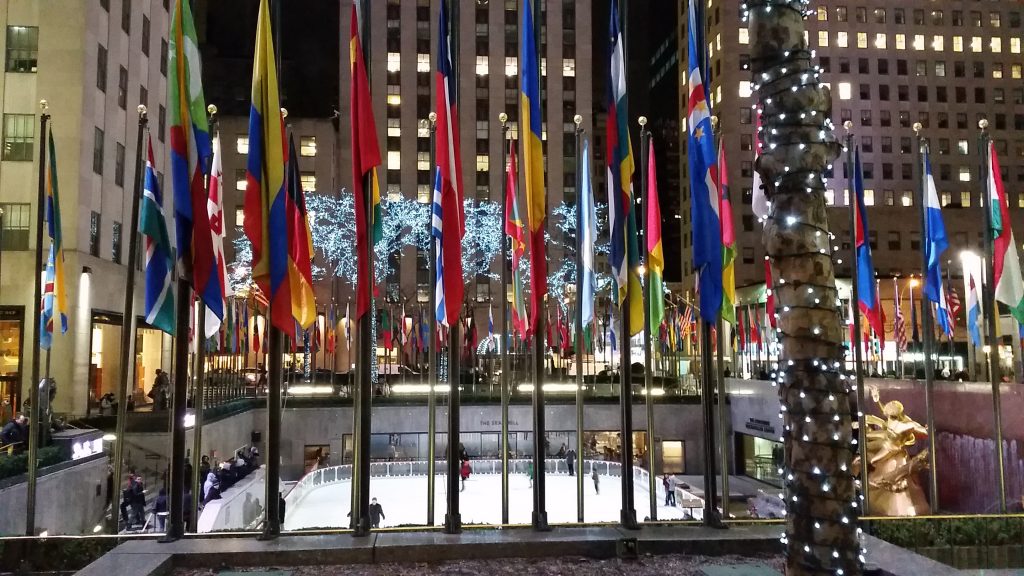 You can iceskate at the Rockefeller Centre, but I wanted to save this for Central Park.

On our travels we came across The Flatiron Building in Manhattan; a 22-story, triangular skyscraper that is gorgeous to look at. We found a Mexican bar and restaurant just down from here and honestly could have stayed sitting at that bar all day. 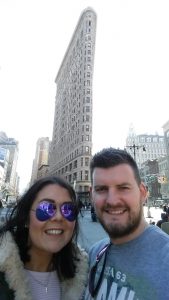 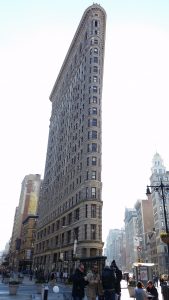 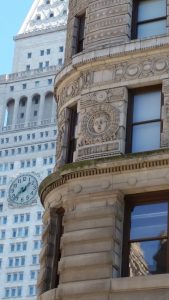 The biggest tip for what to pack is 100% comfortable shoes! Trainers are what I would suggest. I took flat shoes (boots) but they weren’t good enough for the amount of steps you get in. I ended up buying two pairs of Nikes from Macys.

If you’d appreciate a little peace, take a walk along the High Line; an elevated linear park created from a former New York Central Railroad. As you can see, they’ve kept the feel of the train tracks and in places the sleepers are still there. It lifts you up from the busy streets and although you’re only 20ft or so above ground you feel like you’re in a completely different place. Our walk lead us to the Chealsea Market in the Meatpacking District. If you like visiting markets, you won’t be disappointed. Local businesses sell their wares, from jewellery to bags, to things for your home and of course, lots of food is on offer too. I bought myself a little silver wishbone ring as a souvenir from here. The twinkly lights cover the ceiling of part of the interior. It’s the best market I’ve ever been to. 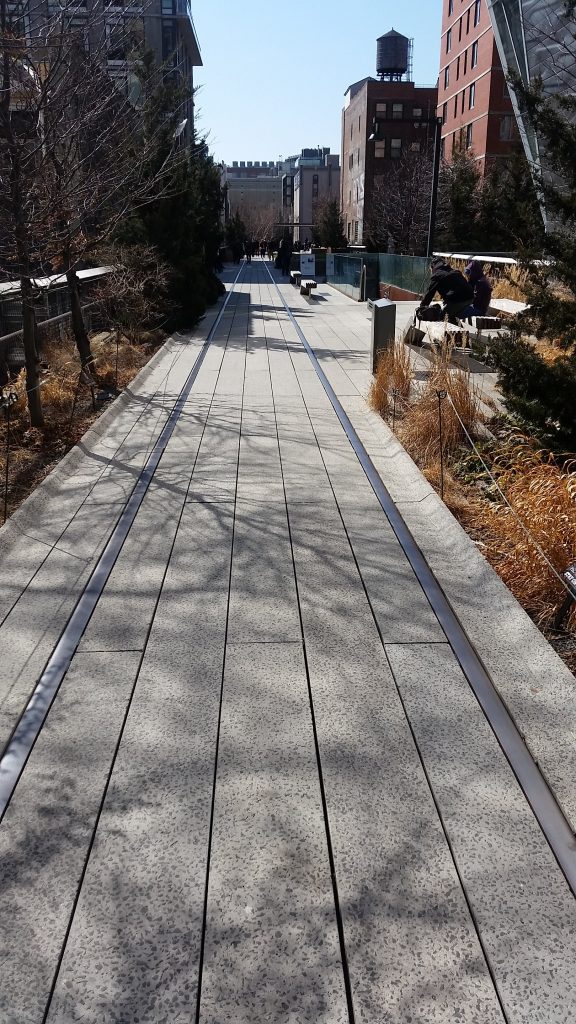 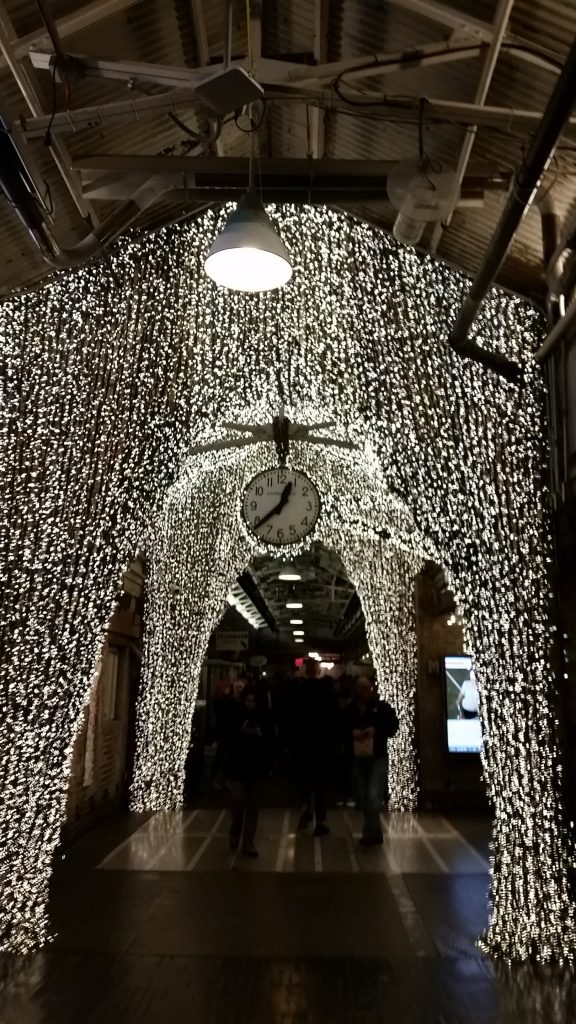 You can’t go to New York and not be able to say that you walked across the Brooklyn Bridge. That’s now ticked off my list too. 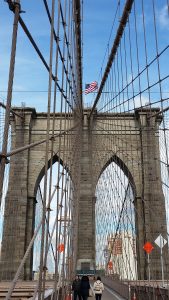 Recognise this building below? Little Owl is a restaurant that was used as the outside scene for the Central Perk coffee shop in Friends. We booked a table here about 4-6 weeks in advance of our trip after a recommendation. To be honest, it’s quite far out from where we were staying, located in the West Village, so this was the only time we took a taxi anywhere. I wanted to wear heels that night! The food is gorgeous but expensive. It was a nice treat. 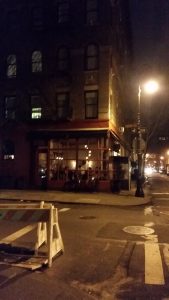 You’re going to be doing some walking so no need to feel guilty about the carbs when you’re away. New York is known for its amazing sandwiches; I think Joey from Friends helped sell that for the city. I wanted to make sure I got to enjoy the delights of Katz Deli. They did not disappoint! Expensive for two sandwiches and two cans of pop (around $55) but you probably won’t need to eat again that day! We went for pastrami and burnt ends. I promise you a taste sensation. 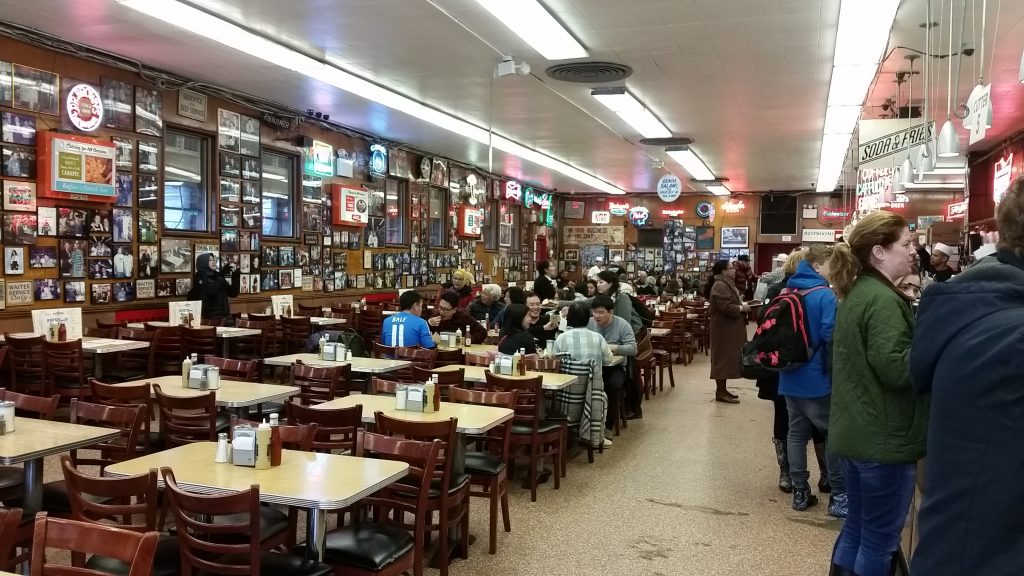 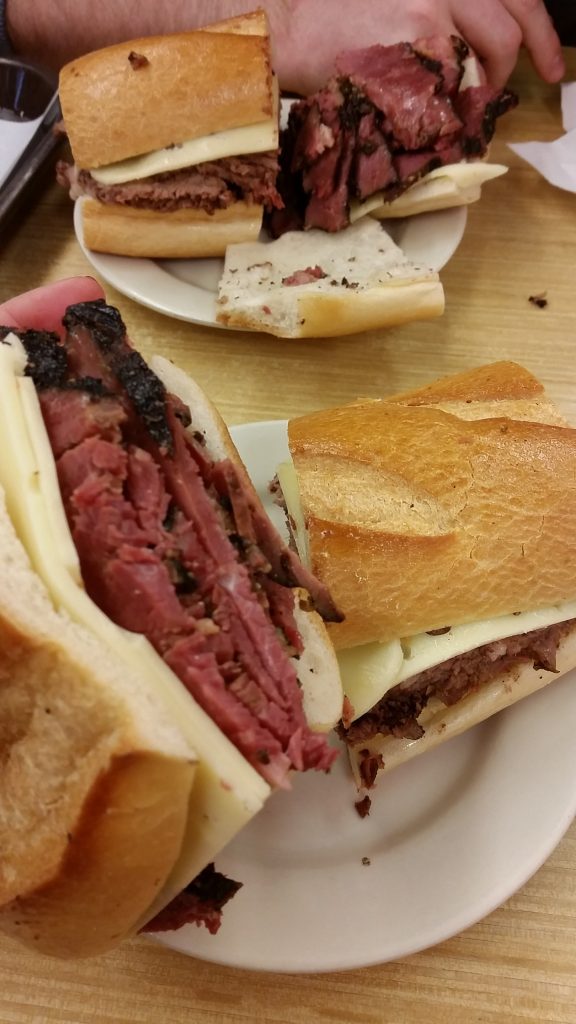 You’ll never be too far away from the famous Central Park. It’s lovely to walk around, day or night. There is so much to see, including a zoo, but we didn’t go there. You’re so close to all the hustle and bustle yet you wouldn’t know. I was dead set on skating in Central Park and really wanted to do it at night when it is all lit up. It costs around $50-60 including the hire of a locker. It was so much fun, taking me back to my days when I used to iceskate 3 times a week in Doncaster when I was younger. 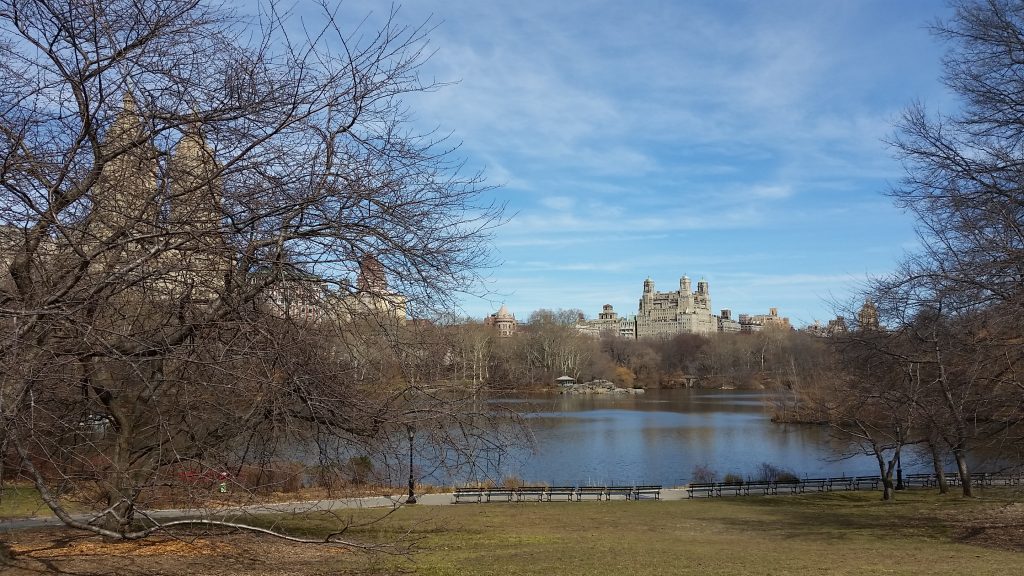 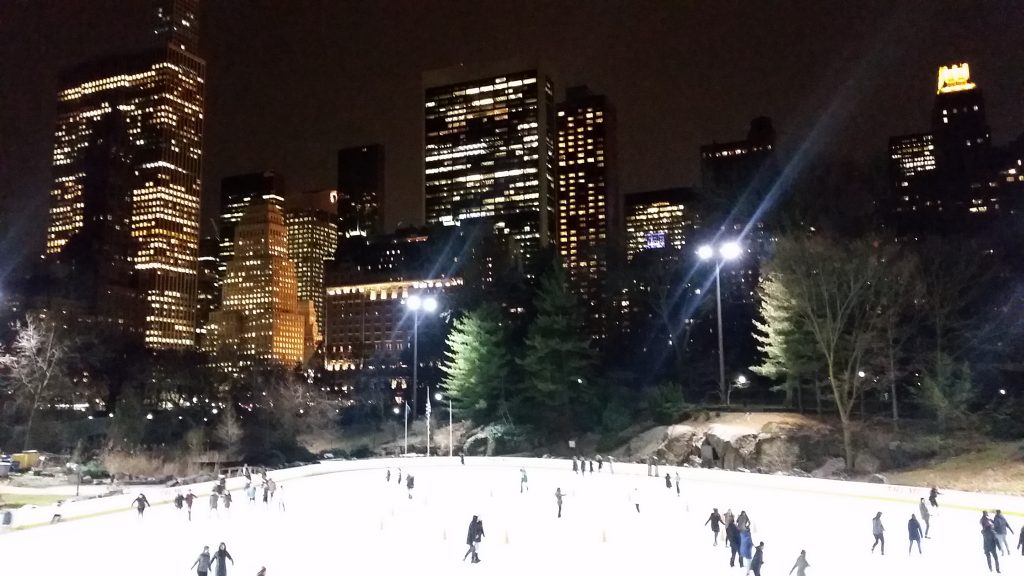 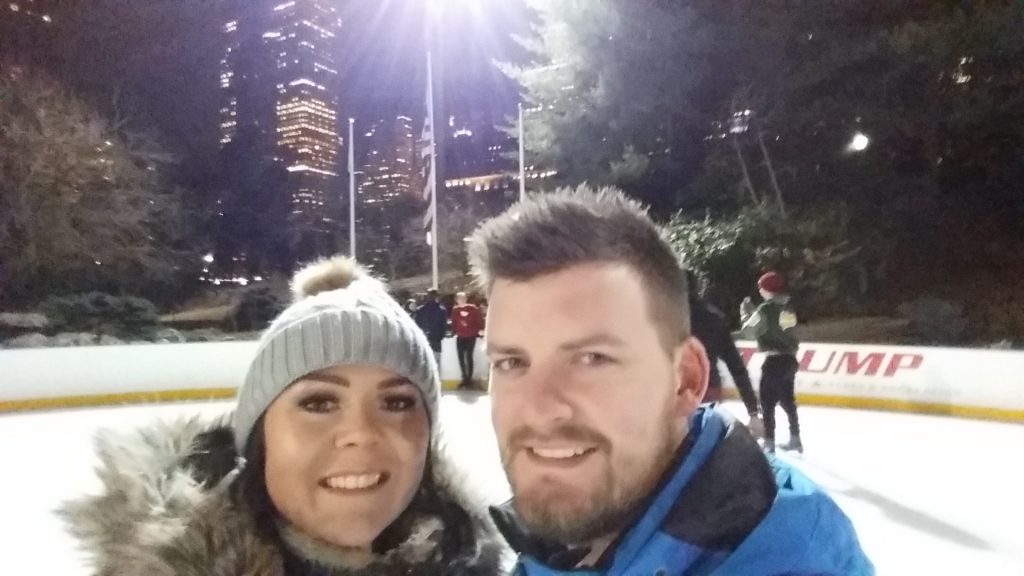 I thought I’d share a few pictures of the breakfasts we ate. If you’re heading to Macy’s, I’d recommend trying the nearby Sky Line; it’s your typical American Diner. Nothing fancy, but brilliant food and a menu the size of a broadsheet newspaper! See what we ordered below (3 out of 4 plates were mine!). The French Toast was the size of a doorstop but so good! They do say breakfast is the most important meal of the day. This is what we had after the early start for the Empire State visit. Macy’s is 1-2 miles away from there. Like I say, we walked everywhere! We did try the underground one time, just to say we had done it, but I’d much rather be out and about above ground, taking it all in. 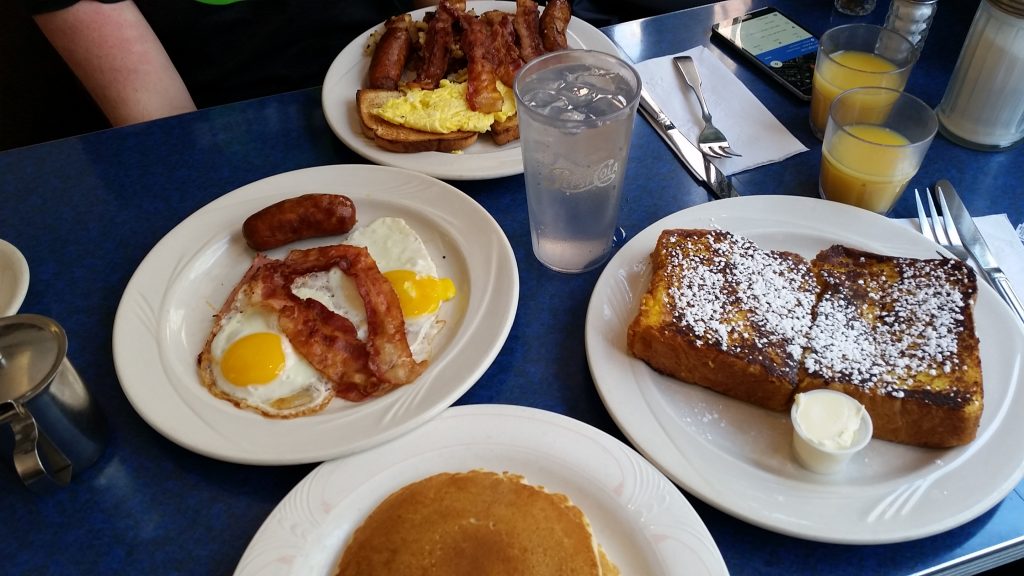 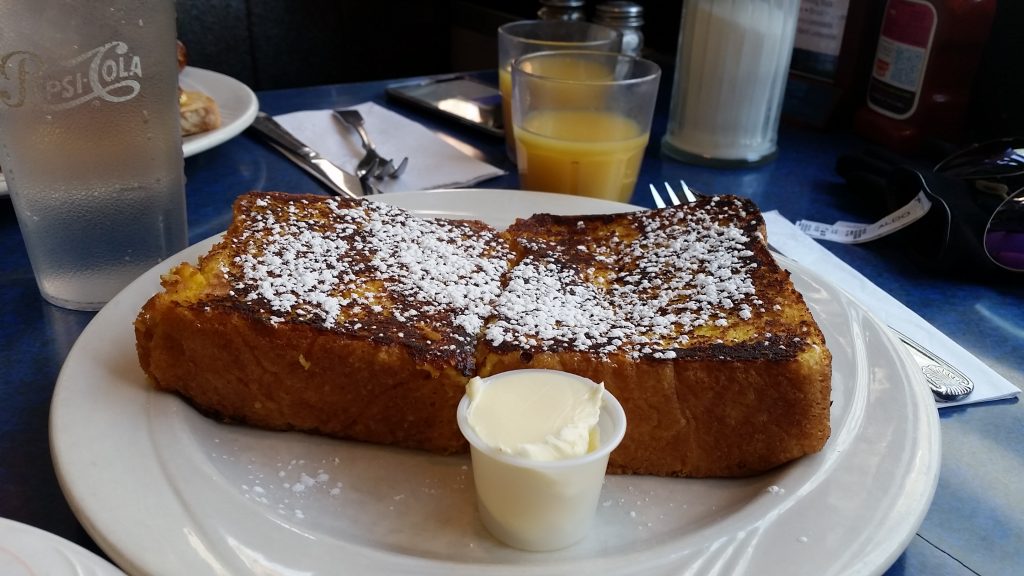 The Butcher’s Daughter is a popular haunt among bloggers and creatives and I discovered it after watching a YouTube video by another UK blogger who had visited. There’s the usual avocado on toast, breakfast bowls and other plant based meals. I loved their interiors. We headed there for breakfast one time but they’re open all day. It was quite a walk from our hotel, maybe 4 miles, but worth it when we got there. 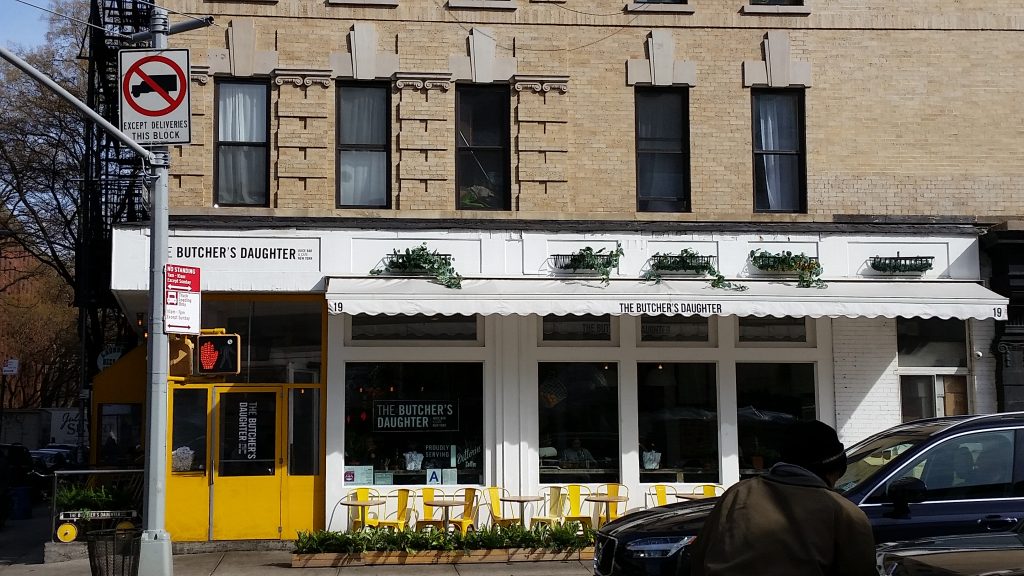 Applebys is an old time favourite of mine from my childhood in Florida, so I had to drop by for a nostalgic breakfast here, this was on our last day. 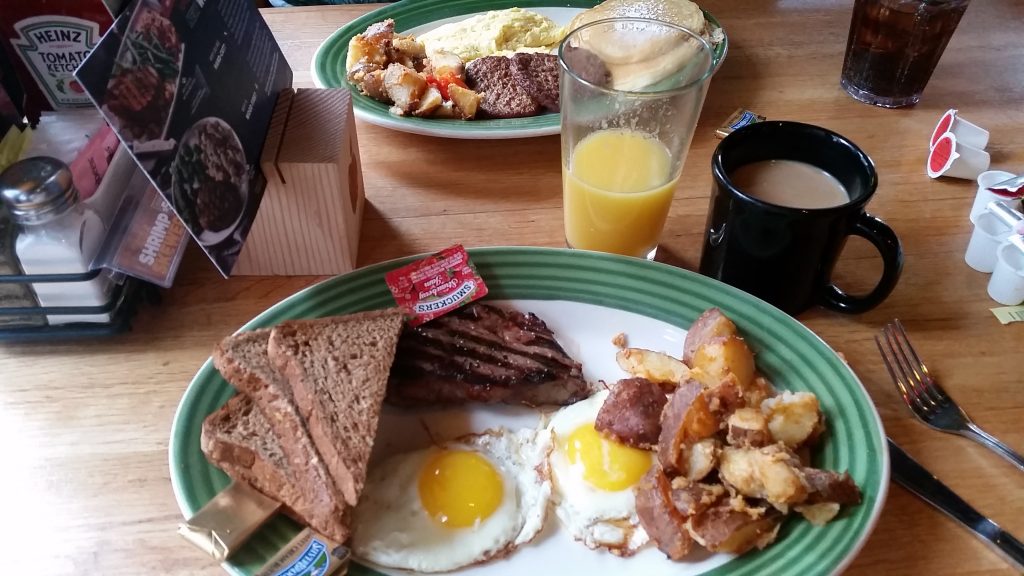 I think 5 days is plenty to get to see most of New York. I thoroughly enjoyed my time there and next time I go I’d like to visit around Christmas time. I think that would be event more magical.

Next stop, St. Lucia next month! 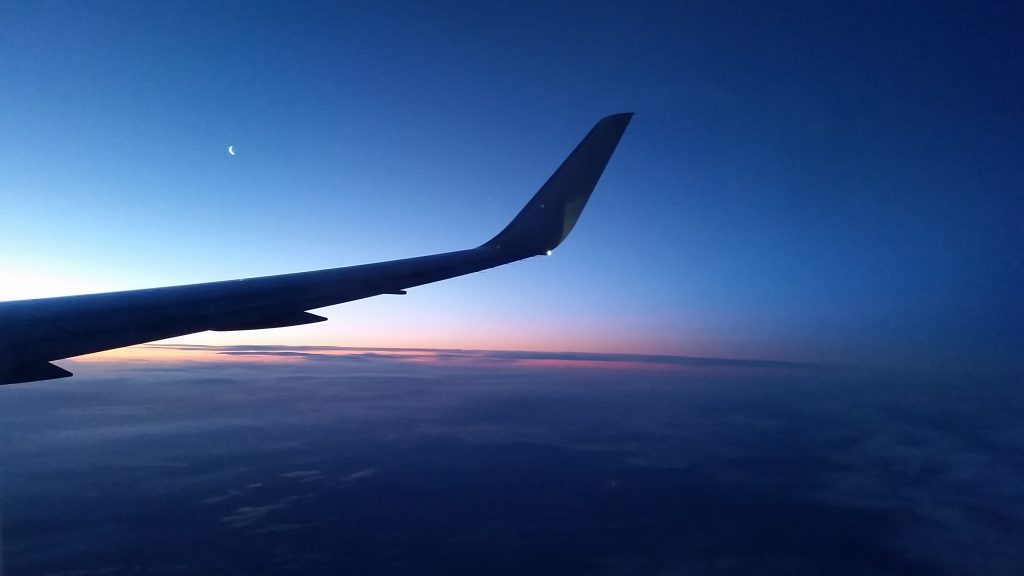